It seems like forever that I\’ve had time to post about what I\’ve been doing.  When I started doing fine art four years ago I was posting nearly everyday.  I was excited about what I was doing and had a lot more time on my hands to tell people about it.  Since then I\’ve got busy.  Busy with art.  Busy with parenting.  There is just so little time to sit and think and share.  I think that needs to change.  I think I need to find the time.

Aside from getting little accomplished this year, I\’ve actually managed to get some stuff accomplished.  Like, my first production toy.  The Dead Kozik bust has arrived in the states and will be on it\’s way out to the awesome backers who supported me on Kickstarter very soon.  Then there will be three colorways available to collectors in the coming weeks.  There will be Bronze, Green and Orange.  After the new year we\’ll release another colorway and then another until all 10 have been released.  Depending on the success of this bust I would like to create a mini bust so that the dead kozik bust is more accessible to those not willing to throw down the money for the big guy.  My hopes are that this very lucky opportunity will allow me a gateway into making my own very unique designer toys.  Let\’s face it, if it were not for Frank I\’d not have a production toy. Thanks Frank

And here are some commissions that I\’ve been too lazy to post pictures of in the last few months. 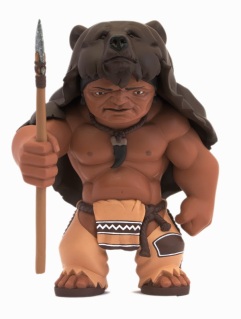 Custom Course Paw
For more pictures of each of these head on over to my flickr account
well, that was a start, let\’s see how long it takes until the next post 🙂